Not Really About Shadow Lane

“It’s good that you haven’t heard of me, because I manage so many websites.”
— Overheard in lift during Shadow Lane, 2013*

This isn’t really a piece about the last Shadow Lane party. It’s more of a stumbling, rambling assessment of what’s up with Paul’s kink these days, huh?, with Vegas as a MacGuffin.

I came back from Vegas feeling — in a slightly achievement unlocked sort of way — that after years of seeing it as a worthy but unattainable goal, my kink has surprisingly settled into a pleasing balance between top and bottom desires. This makes me happy. In the same way that I’ve always aspired to bi/pan-sexuality, for vague intellectual reasons, but been aware that my brain doesn’t really want to know, a wider spectrum of kink interest and facility has mostly seemed out of reach, despite some fumbling attempts in that direction: seemed out of reach despite the attempts; seemed out of reach because of the fumbling. And “wider” is deliberately relative here; these are still baby steps for me. But as steps go, baby steps are pretty significant.

A scene with a friend pushed me to explore a top space that’s instinctively difficult for me. There’s a sort of spectrum of top/bottom dynamic, based on who the scene is ostensibly for. (The layering in kink makes “ostensibly” necessary here; consciousness and outward projection of the layering varies hugely among players.) At one end of the spectrum, where the top’s position is presented as almost entirely functionary, a scene might be “for your [the bottom’s] own good”. Here, the top assumes a role which almost explicitly denies their pleasure (“this will hurt me more than it hurts you”). Introducing a degree of agency for the top, a scene might be about “what I think will work for you”. There’s still some denial that such a scene is for the top, but the role here is more of a collaboration. The scale is tipped further towards top agency and desire when it’s about “how I want you [the bottom] to feel“. This sort of mindfuck entails a consideration of the bottom’s headspace, but the subject of the scene (“I want”) is now the top. Finally, if/when a top talks about “what I want to do to you”, they’re not just taking control of a scene; they’re presenting the scene as unequivocally for them.

This is a complicated dance, obviously, with desires spoken and unspoken, agency taken explicitly, taken implicitly, and sometimes taken by being untaken. But the willingness of a top to claim — to admit — that a scene is for them, is still a brave leap. Tops can settle into a scene dynamic which denies their agency and pleasure because the role of quasi-teacher/parent works for them, but I think there are plenty of others for whom the selfishness of the act just tastes wrong. Perhaps it reveals something about themselves that they’d rather not see, so there’s a retreat into a safer dynamic of justified discipline. It’s one thing to want to hurt someone you care about; it’s quite another to want to do it without apparent regard for their pleasure or well-being. That’s, you know, sadism.

When the friend asked me if I wanted to “beat her”, and made it clear that it would work for her if I actively expressed the selfishness in topping that exists at that end of the spectrum, I knew it would involve flexing muscles that aren’t well developed. Ultimately, what made the scene possible for me was knowing her well enough to be sure that she was sincere; and also, I suppose, knowing that she knows me well enough to have some sense of the parameters we’d be playing within. But still, there was no negotiation or collaborative planning beforehand, I genuinely tried to please my own desires, and I knew that short of a medical emergency the scene would follow my path. It’s revealing of my latent insecurities that it’s still not especially natural for me to talk about having enjoyed a scene like that. I’m always instinctively drawn to discussing scenes as having “gone well”, or not having gone well — the point being competence, proficiency, performance, rather than enjoyment. But I did enjoy it. I enjoyed being selfish, and I enjoyed hurting her.

Thank you for you order.

Unfortunately we are unable to sell specific blazers to non school attendees.

If you can provide us with your sons name, year and form teacher we would be happy organise a blazer for him.

Our apologies for any inconvenience this may have caused and i look forward to hearing from you.

The e-mail wasn’t entirely unexpected — it doesn’t seem unreasonable for schools to have issues with pervs playing with their specific image — but it was a bit disappointing. The shop is one that I’ve used many times, both in person and by mail order, and all has been well in the past (my California address might have rung some alarm bells). The order that was being questioned was for a blazer to complete a uniform I was putting together for Vegas; it’s one I’m familiar with from where I used to live, and had most of the pieces for already. I thought about bowing out gracefully — I did feel somewhat busted, as if I was doing something unethical and had been caught out (“as if”?) — but decided to try again. I made up a story about the blazer being for a “theatrical production” (Shadow Lane being a bit theatrical?), which I’m sure wasn’t at all convincing, but the shop bent a little. They weren’t willing to sell me the blazer I wanted, but let me have a similar blazer, from a school that either isn’t so protective of its image, or that the shop cares about less. I was still slightly deflated — the integrity of the complete uniform would be lost, which for a fetishist like me is significant — but it was a decent compromise. I had something for Vegas.

I’ve been trying to let this side of me out a bit more the last couple of years, and Vegas has been a nice stepping stone in that process. I wore a different uniform to the vendor fair last year, but it wasn’t quite right. I’m not sure why: some pieces didn’t fit properly; my mood wasn’t entirely there, perhaps. This year, I was hoping to make a better stab at it. What uniform means to my kink is complicated. The links to spanking/CP are obvious, but it has its own life and significance for me, that are to do with stripping away a cloak of invisibility — and, hence, the psychological protection that invisibility provides. Uniform is about being seen, and specifically about that part of my personality being seen. Insofar as a six-foot, 280-pound man can be invisible, in my daily life I feel — and probably strive to be — invisible to the people around me; to be unobtrusive, to not draw attention. Uniform is a layer that’s added, in order to reveal. For me, it’s neither age-play, nor role-play. If there’s such a thing as “me-play”, that’s what it is: it’s me playing at being bits of me that don’t come out naturally. And since it’s about being seen, what better place than around hundreds of people in the ballroom of a Vegas hotel?

Another reason for wanting to present myself in this way was to strike a small, token blow for male submissiveness at Shadow Lane. There are plenty of submissive (and switchy) men there, but very few are willing to present in that way — and even fewer so overtly. The party itself isn’t unfriendly towards /M, but the public tone tends very much towards M/F, with anything else hidden in suite parties. I liked the idea that I might draw some eyes; that some men who saw me might wish they were dressed in a similar way — or their own equivalent — and feel empowered to do that later. For someone with plenty of body image issues, who is anything but an exhibitionist, this was a strange brew.

So: how was it? With the caveat that this was still Vegas, where hyper-reality is the norm, I felt comfortable, and normal. I felt like me. Mostly, it was easy — which surprised me. I did feel very visible, and that was okay. Did I feel submissive? Not especially — the connection between uniform and submissiveness remains tangled. If the right hand had taken me by the ear to a corner, or across their lap, I’d probably have gone willingly; but that wasn’t especially the goal, and it didn’t need to happen for the experience to be complete. (I managed not to have any pictures taken at the party, so find some selfies below.) 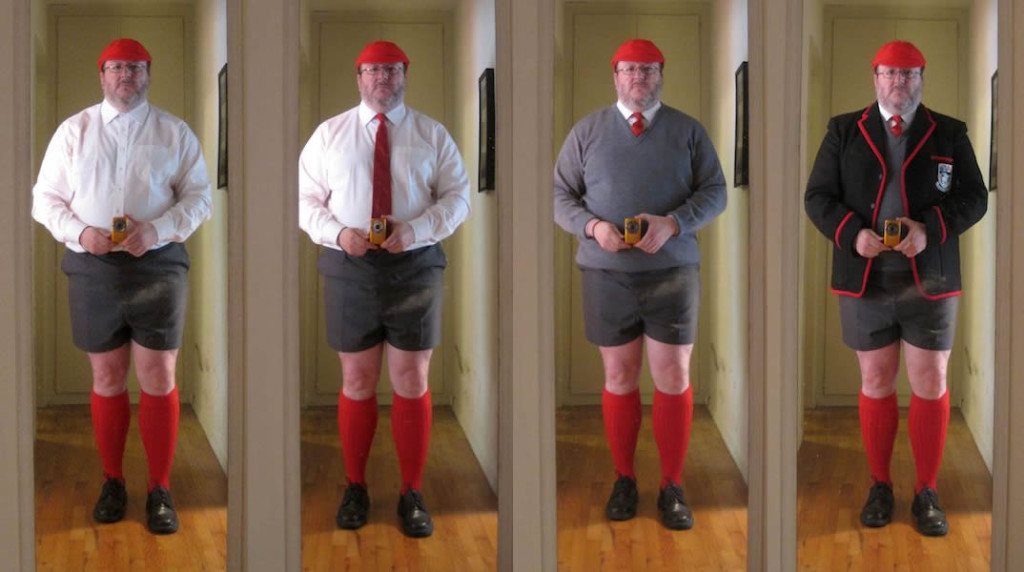 After about a decade and a half of doing this, more and more I feel like I’m barely starting to figure a lot of it out — and I suspect that’s the way it should be. My kink feels more balanced and flexible now — less dependent on play working in a particular way, or having a huge significance for someone’s life. I’m getting better at being ethically selfish in play. I’m also moving towards realising that bottoming, for me, is about submitting to being passive and quietly obedient — which I’ve always seen as making me a terrible play partner, and tried to deny because of that, but I can’t really choose what I have to work with. A small scene with a friend at the start of the year even helped me to let down the barriers to pain that make me instinctively tense and resist during play, and find a better place for it. Another one of those baby steps.