Just Not As Bright

To Vons, a few nights ago, to buy some old-fashioned incandescent filament light bulbs, because the batch of long-life fluorescent bulbs we got at Costco a few months ago lend our living room the snug, inviting glare of a car parts warehouse.

Standing, slightly baffled, in front of the display, it took me a few moments to figure out that I couldn’t see any 100 watt bulbs, and a few moments more to figure out why. General Electric, at any rate, doesn’t seem to supply them to Vons any more; they’ve been replaced by a ‘reduced wattage’, ‘energy saving’ alternative. Good for them. Pictured is the packaging. 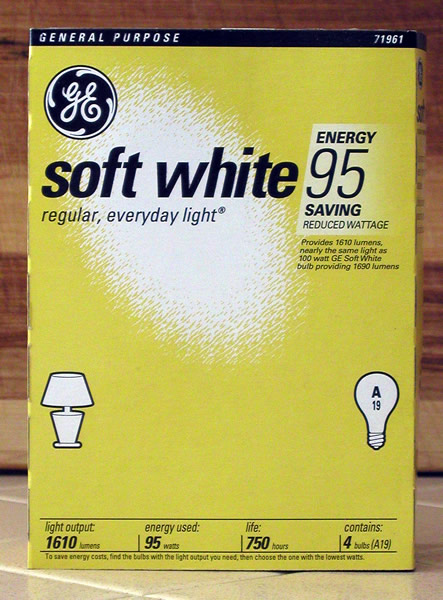 The copy takes a little unpacking. Note the prominent ’95’ at the top right, to which the eye is drawn, and then note that it’s only ’95’ — that the fact that this is actually the wattage is gently elided. It might almost simply be some sort of internal code number for the bulb type. Perhaps less charitably, sandwiched between ‘ENERGY’ and ‘SAVING’ there’s an implication that this might be the extent of the energy saving; that what we’re being offered here is a bulb which saves us 95 somethings — probably a whopping 95% — compared to some other product. (It borrows ad-speak from the conceptual flip which results in products touted as ‘95% fat free’, or somesuch, to represent the fact that they’re 5% unreconstructed, unequivocal fat.)

The reinforcing smaller-print below adds to the bamboozlement:

‘Nearly the same’ is a very nice touch. It suggests that the bulb we’re looking at is the end product of a dedicated research effort to match the output of a 100 watt incandescent bulb, despite the massive energy saving of something connected to the number 95.

The narrative here is pretty simple: it’s an attempt to borrow some of the zeitgeisty love for energy-saving products in general, and long-life, low-energy bulbs in particular. More than that, it’s more or less an attempt to imply that these are those long-life, low-energy bulbs we’ve heard so much about; that we’re looking at sparkling new eco-friendly, thrifty technology, which nevertheless keeps our homes ‘nearly the same’ brightness.

It’s not hard to imagine the rationale: they’ve got huge investment in incandescent technology, which also keeps turnover nice and high, since the bulbs, you know, burn out. At worst, Ms Consumer sees a product which does practically the same job as before; at best, incandescent masquerades as eco-bulb for a while, and Ms Consumer misses the fact that this doesn’t use less energy because it’s fancy new technology, or because greater efficiency is squeezed out. It uses less energy because it’s just not as bright. There’s a metaphor there, I think.

This is why I could never be a successful salesperson. I couldn’t bring myself to this level of bamboozlement and bandwagon-jumping. It’s not honesty that would stop me; it’s embarrassment. I’d be embarrassed to stoop to such mangling of clear thought, just as I’d be embarrassed to try to puff a product that was borrowed wholesale from another. This is where you end up when your job is to make money, rather than to make a thing you believe in, or to have a genuinely new idea.

A small postscript. At the checkout, always a place of minor annoyance for me, gazing hopelessly at the uninviting American chocolate (‘Oprah Magazine: Because you owe it to yourself to be the best narcissist you can be!’), sat a copy of — and I really wish this wasn’t true — The Complete Idiot’s Guide to the Last Days. Hoping for an Onion-esque spoof, or at least a measure of detached irony, I was disappointed. It’s exactly what it claims to be: a ‘Biblical’ guide to armageddon and the rapture, complete with charts and timelines. The people it’s aimed at?

Just not as bright.