I always knew I had no small talk, and now I know I’ve got no big talk either.
— Sue Townsend, The Growing Pains of Adrian Mole

I feel like I’ve grown up with Adrian Mole. We’re roughly the same age, and I have a nagging suspicion that I have more of his pretentiousness than I’d like. (Does suspecting that make a difference?) I hope I have a little more self-awareness.

I’ve always loved the line about small talk and big talk. Adrian’s mother’s father has just died, and he’s at a loss for what to say to console her. The first half of the line is typical Adrian — it’s as much bragging that he has no small talk (because he’s an intellectual), as it is an admission. The second half of the line is far more human. He’s confronted suddenly by a frailty that matters to him.

My dad died two-and-a-half weeks ago. I’m finding it easy to write reams of wanky stuff about US and British comedy, but not much about my dad. I don’t think that’s because the loss is too raw. If anything, I think it’s because I’m not feeling the sense of loss that I should be. Probably some combination of my basic difficulty with feeling anything terribly strongly, and the fact that he and I didn’t have much of a relationship. I wish that hadn’t been the case, but it was. We tended to circle each other warily and respectfully, aware that we’d mostly just piss each other off if we got too close.

When I was a kid, my bedroom was at the top of the stairs. It wasn’t a huge house, which meant that if I had a mind to I could eavesdrop on the adults’ conversations downstairs after the kids were in bed. One night I heard my dad recount something he’d said to me earlier that day — some sort of remark or riposte intended to stop me in my tracks, to put me in my place, perhaps even to hurt me a little. My vague memory is that it had something to do with my (limited) skills as a football player. He’d probably had a couple of pints by that time, so he didn’t even attempt to hide his satisfaction in the recounting, and the effect was to kill the downstairs conversation stone dead. I don’t remember being hurt, either by the remark or by the later recounting, but it did seem to set out the terms of engagement — a respectful but competitive distance. I was probably about twelve or thirteen at the time.

I also remember him climbing the stairs one morning, having arrived home after an early football match, covered in mud and still in his gear, describing with a childlike glee how he’d flattened one of the opposing team — who also happened to be one of my teachers — with a ferocious tackle. Me, I was still in bed, but listening, and I don’t think I’ve ever been as proud of him. The competitive instinct was just the same. He was stubborn and argumentative and cantankerous, but also fiercely proud and honest. You could trust him with your life. He drove the people close to him crazy, but he was a far better human being than I’ll ever be.

After a life of considerable activity and rude health, my dad’s body started to fail him about ten years ago — a process which accelerated a year or two ago. By all accounts, he didn’t go gently — that would not have been him — although by the time I’d made it back home from six-thousand miles away, he was calmer, and meaningful communication wasn’t really possible. It’s probably an admission of cowardice, but part of me was relieved that I wasn’t put in the position of finding out that — like Adrian Mole — I had no big talk. But I don’t see any reason to believe that we’d have done anything other than talk in the system of coded messages by which my family has always expressed affection and love. Still, he knew I was there, and I’m glad of that.

The afternoon of the day my dad died, my brother and I walked up to the local cricket club, where my dad had been president for some time. We’d heard that the flag had been set at half-mast, and indeed it had. 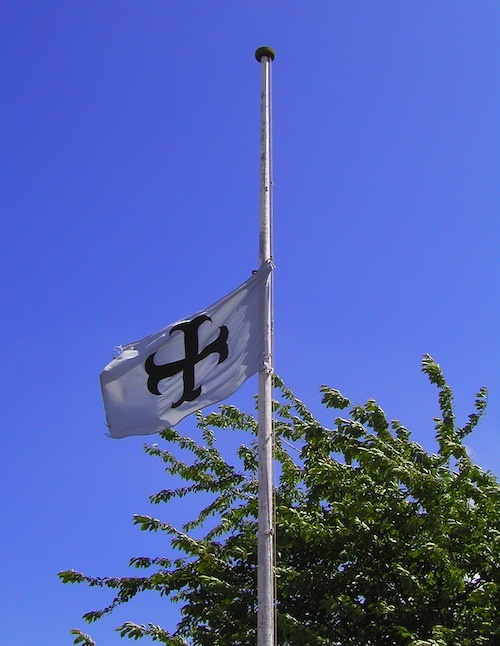 The sky was blue. The day was still, and quiet, and the cricket pitches had the deep green promise of early summer. The world suddenly seemed a more peaceful place.

A week later, I stood outside the gate to what was now my mother’s home, waiting with my sister, brother-in-law, and my dad’s brother for the hearse and the funeral cars. Across the village green, we watched as people appeared from all directions, their dress and purposeful stride giving away their destination. We watched them converge at the church. There turned out to be standing room only, and not much of that. I’d had two-hundred copies of the order of service printed. It wasn’t nearly enough.

Perhaps what I’ve written here might make it make more sense, but I find messages of condolence addressed to me to miss the point. My dad’s gone, but I don’t feel the sense of loss that I should. That relationship had faltered many years ago — and that was the real loss for me. What I find myself feeling for my dad is a kind of perverse hope that he was sufficiently fed up with how much his body had failed him — the pain and indignity — that letting go seemed preferable. I hope he wasn’t afraid.

And life goes on, even after the loss of someone who filled a church to overflowing, and for whom a flag was lowered. There’s something comforting about that, I think.