After years of bristling with annoyance at any suggestion that my very vaguely Anglican upbringing might be much of an influence on what I do or don’t believe — one flavour of which might be to imply atheism as a negative reaction to something imposed, rather than a ground-up positivist construction of something new and real — I think I have to admit that I am, after all, something of an Anglican atheist. It doesn’t relate to beliefs or lack of, though, so much as it does to the aesthetics surrounding the church. I have a quiet regard for the bumbling diffidence of the Church of England, its unshowy plump comfort like a familar sofa. Its buildings, too: the parish church of my childhood has the cool calm of history, flowers rather than trumpets; Durham Cathedral has the confidence not to need to compete with Rome or Mecca, knowing as it does that it has them beat hands down.

We were below-the-title guests at a wedding held at the Cathedral of Our Lady of the Angels in Los Angeles last month. It was a sweet affair, full of youth and optimism, the groom’s brother tall and serious, the bride’s sister’s barely-covered curves bursting in all directions, the combination a potent mix of the righteous and the joyous. The space is light and warm, full of the very best piety that money can buy. And yet it can’t touch the peace of Durham. Maybe it’s just its youth; maybe it seems to be trying a little hard. It didn’t help that on at least two occasions we were invited to applaud, an act which struck me in context as about as self-evidently wrong as licking the knife you’re eating with. The officiating priest’s head-microphone, and his stalking down the aisle while sermonising, like one of those stand-up comedians who’re unhelpfully in thrall to the memory of Lenny Bruce, also broke whatever spell remained. 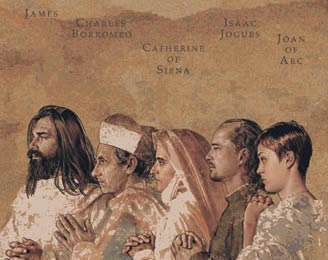 I found my attention wandering to the hugely impressive tapestries which line what passes for the nave in the place. They look like representations of saints as real people, because that’s mostly how they were conceived. Joan of Arc, in particular, casts a lovely image. I wondered who the model might have been. Her simple features seem almost to draw themselves in from modesty, the back of her neck bared boyishly — a feature I will admit to finding deeply attractive — her hair seeming to promise a heaven of top-notch shampoo and conditioner technology. Frankly, she’s a cutie. I’m aware of how deeply wrong this is, and I blame my Anglican upbringing.