Everything that I’ve read about Katamari Damacy is absolutely true, both the good and the bad. It’s a stroke of genius. It’s Tetris-quality game design. I can see how it might not have taken off commercially in the west, though. The games’s framing narrative is wilfully, surreally Japanese, and has been kept (so far as I can tell) intact from the original, including the unfathomable name. I’m quietly delighted that they didn’t even choose to modify the game’s measuring system to switch from metric to imperial for the US market. Though for that reason also it’s a shame that the game won’t find a wider stealth metrication market. 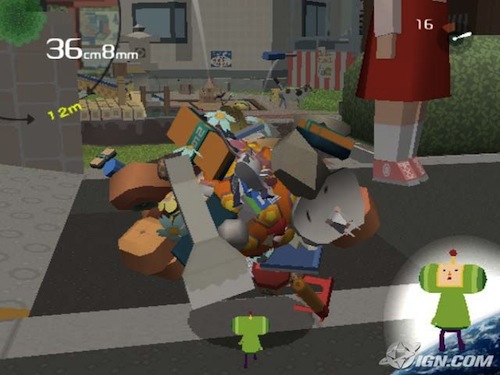 Ten, fifteen years ago, KD would have stormed arcades all over the world. Not just because it’s wonderful, but because it’s essentially an arcade game, and there are so few creatures of that nature these days. It’s not a massive quest; not a first-person carnage-a-thon; not a cheesily ‘authentic’ sport simulation. It’s a game. There’s a feeling of joy about the entire thing. The happy soundrack is buzzing around my cranium as I write this.

I think one of the underappreciated aspects of KD’s druggily-adrenaline appeal is that it’s based on geometric progression. Though one might start a level pushing around a tiny Katamari beneath a car among mice and scattered bits of odd detritus, within a matter of minutes cars and buildings and even entire islands are being swept up in your inexorable path. That’s really possible as a game dynamic because the objects you’re able to gather depend on the size of the Katamari, and the growth of the Katamari depends on the objects that you gather. So what you have is a positive feedback loop. It’s compound interest, if you like. There are particular moments of genuinely childlike glee, when the Katamari size passes a threshold and suddenly a whole new class of objects becomes gatherable: trees, or skyscrapers, or the pesky policemen who’d been shooting at you (impotently, of course — it’s not that sort of game), but whose legs now kick helplessly as they stick out of the side of the Katamari.

Life doesn’t have all that many positive feedback loops. Compound interest is one, but even that works in a matter of years, not minutes. The feeling of growing from mouse-size to skyscraper-size in minutes — though apparently seamlessly — and then squishing together all of the world, is one of genuine power. It’s an escape from a normality in which feedback rarely exists, and almost never in our favour. In the Katamari world, it’s as easy to get from one metre to a hundred metres as it is to get from a centimetre to a metre; that’s the geometric progression, and the game wouldn’t work without it. Life, however, asks us to expend a hundred times more work to get from a hundred words to ten thousand, than from one word to a hundred. A thousand times more steps to get from a metre to a kilometre, than from a millimetre to a metre.

Ever the tediously didactic maker of analogies, I tried to encourage A. in her work the other day by asking her to compare her writing with the growth of the Katamari. You might start under the car with the mice, rolling around small things and growing slowly, but soon — and before you realise it — even clouds and rainbows and Godzilla monsters are being gathered in. Concentrate on where you are now, not where you’re going, and soon you’ll grow much bigger than you thought possible. Think of the cookies that you’re gathering now, and not the skyscrapers that you’ll be gathering soon.

It was a big cheat, of course. The game has the positive feedback loop. Writing, unfortunately, doesn’t. That’s why it’s not a game, I guess.